You are buying an assembled and tested Amiga Floppy Drive adapter.
This smaller "Mini" version is intended for direct attachment to the rear of a floppy drive.
This version comes with power and drive activity LED indicators installed.
The floppy drives shown in some pictures are for demonstration purposes only and not part of the auction.
This adapter can make many standard PC floppy drives work on an Amiga computer (as DD drives only!).
As shown in the last picture, some drives may not be suitable due to their physical connector layout.
Some drives may be modified by relocating the power connector or simply adding a power cable extension.
I have tested the following drive models as working "out of the box":
- Panasonic JU-256A198PC
- Teac FD-235HF
Working with cable extension:
- Panasonic JU-257A606P
Not suitable due to connector layout:
- Sony MPF920 (check out my other adapters)
All required settings jumpers for PC floppy drives are preconnected on the PCB, but could be modified by cutting traces if required.
The Amiga device selection comes with a jumper to select either DF0 or DF1. Some Amigas require to connect the _MTRX signal from the mainboard to pin 16 of the adapter's input connector to make anything higher than DF0 work. Gotek drives or other similar devices without real motor may not require this signal.
This device will work with any classic Amiga computer (A1000, A500, A600, A1200, A2000, A3000, A4000).
Most games and demos will work fine. No special software or driver is required.
This adapter comes with a pre-attached power wire for easy plug-and-play on the drive.
Optionally, a second 4-pin power header could be installed instead of the the power wire. Please send a message if you prefer this option.
An additional power wire and standard 34-wire ribbon flat cable have to be attached from the Amiga to the adapter. 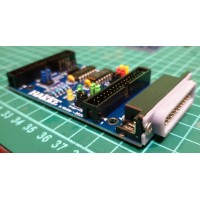 You are buying an assembled and tested Amiga Floppy Drive adapter for internal or external use.This .. 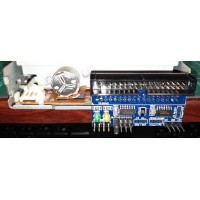 You are buying an assembled and tested Amiga Floppy Drive adapter. This smaller "Mini" version is in.. 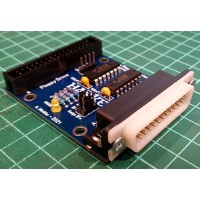 You are buying an assembled and tested Amiga Floppy Drive adapter for external use.This adapter can ..